March, April, May, June 2020
Meeting cancelled as a precautionary measure due to Covid-19.

Lathe maintenance instruction along with a Questions & Answers.

Scroll saw demo and have a go .

Bring a tool to get sharpened and a demo on how to use the Tormek grinding system.

Pyrography machines  a couple were available to encourage participation.

The theme of the display table  was items that members had made over the Christmas period!!

December 2019
The turner of the year was Greg Keenan who was presented with the John Owen memorial trophy the intermediate prize was won by Rachael Collard and the novice prize by Rebecca Durbin.

The display table was for wood turned boxes.

The display table was for wood turned fruit items.

August  2019
Club member Peter Davis devoted the evening to making fruit items he taught us how if we made a few mistakes that it didn’t really matter and to remember that above all our interest must above all be fun and be a source of enjoyment.

Chairman John Dilley again reported a poor response for the Bleadon Show and asked  members to please fill in their name on a spreadsheet if they could help out on the day with set up and strip down sadly none of the thirty attending members made any commitment to attend.

July 2019
Ex Chairman John Smith gave a detailed demonstration of how to make barley twists using powerpoint to enhance his talk this made for a most interesting meeting.

The display table was well supported with various platters.

Two more people took up membership at this meeting giving us a total membership of 54 members.

It was with great sadness that  we were informed by Sylvia wife of Denis Cox life member of our club that he had passed away this morning 2/7/19.

Those who knew him will remember Denis as a kind talented woodturner and a skilled wood carver who was always keen to share his extensive knowledge of our craft.

As a long serving club member and friend to many Denis will be sadly missed.

June 2019
Member Paul Sweet demonstrated how to make a  platter.

The display table was for themed items following Mark Sangar’s presentation at our May meeting.

May 2019
Mark Sangar was our visiting guest demonstrator who travelled from Gillingham in Dorset. Wood, mixed media, texture, form and colour feature in his work which is influenced by Far Eastern philosophies, cultures as well as the natural forms and textures found in nature.

The display table was dedicated to egg cups made by members.

March 2019
Dave Appleby was our guest demonstrator who in addition to exhibiting in galleries in the South West of England takes commissions for special items, he demonstrates and teaches in local woodturning clubs and offers 1 to 1 tuition at his workshop.
On the night Dave turned a spoon a whistle and a bowl.
The display table contained items coloured and textured as learned from the previous months demo other items also featured.

February 2019
Club member Bryhan Milham demonstrated how to include colouring on woodturned items a really instructive demo gave us all an insight of lots of techniques including using a hot glue gun to provide stunning textures.
The display table was dedicated to platters.

January 2019
Retiring Chairman John Smith will welcome new Chairman John Dilley along with new committee members this being our Annual General Meeting.
John Smith has held the position of Chairman position for four years and during this period he has overseen club membership increasing
significantly.

During John’s Chairmans period the club continued to be active not only in raising the awareness of our craft but also we in raising money for various local charities.

The club members will be forever grateful to John for his long term commitment to club affairs
The display table is dedicated to items made over the Christmas period.

November 2018
Club member Bryan Milham demonstrated how to make Christmas decorations with a difference.
The display table was dedicated to themed items associated with last months demonstration by Peter Moncrieff-Jury.

A reminder to members who had not booked for the Xmas meal at the Beachlands Hotel and wished to do so should inform John Smith asap payment for this event was due along with menu choices.

October 2018
Our guest demonstrator was Peter Moncrieff-Jury who travelled from Chippenham and kept members interested in his tips and tricks.
The display table was be devoted to off centre turned items.

August 2018
Club member Bryan Milham will demonstrate how to make a long stem goblet.
The display table will be devoted to woodturned items made from 2 or more types of wood.
Retired member Ron Waterfied has listed a number of items for sale. Full details are on our website with photos and prices their are some real bargains to be had.

April 2018
The evening was devoted to a number of multi skilled demonstrations from club members including scroll work, pyrography, woodpiercing and two woodturning lathes will be operable.
The display table was of items inspired by Richard Jefferies who was the guest demonstrator at our February meeting.

March 2018
Visiting Richard Jefferies demonstrated how to correctly sharpen tools he also was selling some woodturning tools and equipment.
All members of the club were encouraged to provide any woodturned item for the display table which was devoted to items with a romantic theme to reflect Saint Valentines day.

January 2018
The club AGM will encourage members to participate within the club committee to steer the club through the forthcoming year.
Chairman John Smith will continue to serve as Club Chairman along with a newly appointed committee
All members of the club are encouraged to provide any woodturned item for the display table.

December 2016
Yet again there was a lot of competition at this years turning competition with the winner of the John Owen Shield (formerly ‘Turner of the Year’) going to Ray Thomas.  Ray was awarded this for also winning the Advanced category with a beautiful trinket box.  The intermediate competition was won by Norman Poole and the beginners by Jim Lloyd.  Well done to all entrants. 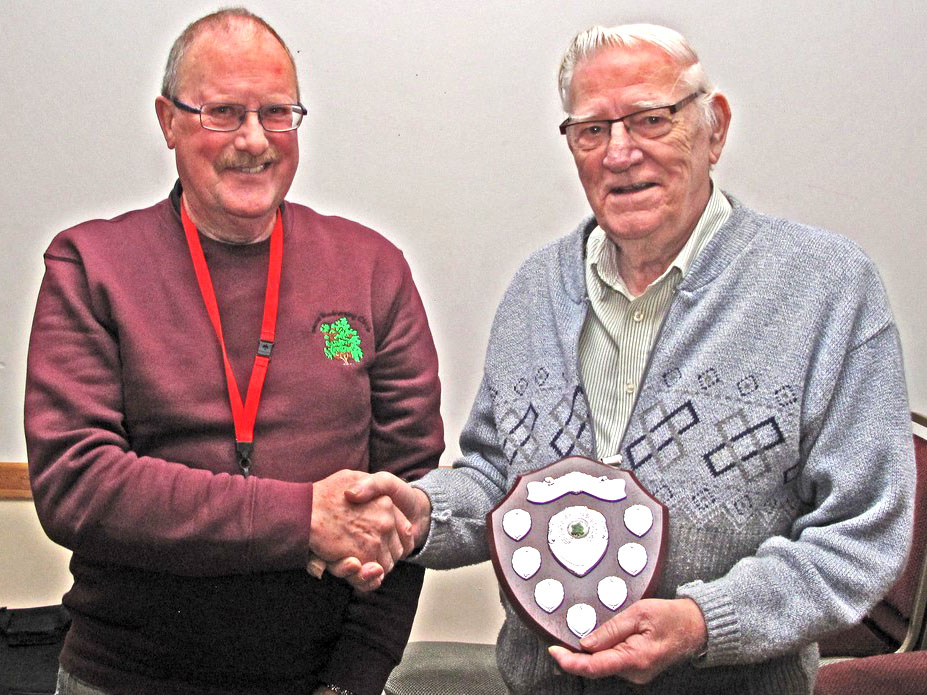 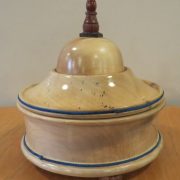 It was with great sadness that we all heard about Life Member John Owen who passed away after a short illness John will be much missed.

In John’s memory, the committee have elected to name the annually awarded shield “The John Owen Memorial Shield”.

Ray Thomas was awarded the “The John Owen Memorial Shield” as turner of the year for his jewellery box along with a prize of £50.00.

The annual auction raised an amount of £472.00 with items sold previous to auction and monies from the flower show this gave us a total in excess of £1400 to present to the Young Carers charity in January.

Rachel was again thanked by Chairman John for providing refreshments throughout the year.

We finish the year 2016 with a membership of 52 including 3 active life and 2 non-active life members this number sadly included 2 deceased members i.e. John Owen and Ken Corp and another member who resigned.

November 2016
Paul Middleton demonstrated pen making and encouraged members to make a pen to take away on the night following tuition.

Following Secretary Greg’s persistence, we have been awarded a grant of £300 from the AWGB to help our club run a 30th birthday party event during 2017.

The display table was dedicated to Christmas items.

The display table was dedicated to Fruit items.

Club clothing Items were on display at the  meeting and Paul will be happy to take orders with a 20% deposit with order.

September 2016
Tuition for beginners, intermediate and skilled continues to be provided to all members by a number of our more talented club member turners.

The display table was for Halloween themed items.

The display table was dedicated to Offset turning.

Chairman John thanked members that donated items to sell on behalf of the Young Carers Charity and to those members who gave their support to man the club stall at Weston Flower Show the event raised £340.00 on behalf of this charity.

Four club member workshops were approved for suitability for additional tuition these were Peter Davis, Paul Middleton and John Smith and Les Cummings.

The display table was for Barley twist items.

The display table was devoted to Budvase’s

May 2016
Dave Appleby demonstrated at this meeting.

The display table was dedicated to Pyrography items

April 2016
Club member Paul who was named Crafter of the Year 2015 by the Southern Voice Publication for expertise in pen making demonstrated bullet case etching as part of the pen making process.

The display table this month was dedicated to Coloured items.

The display table was related to Easter themed items.

February 2016
John Aitken known as the Bowler Hatted Turner demonstrated at our meeting.

The display table was dedicated to Pierced items.

January 2016
Club AGM Followed by a question and answer session.

December 2015
This saw the first club competition happening with 3 categories of prizes and a turner of the year.  Prizes were £50 for the winner of each category.

During the meeting, the first of an annual competition was held.  The competition was open to all members and split into three categories to ensure everyone had the chance of winning one of the £50 prizes up grabs. 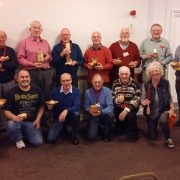 Advanced – Been turning more than 3 years (Turn anything)

Every single entry was deserved of the a prize but there could only be one winner in each category that was achieved by members dropping tokens next to their choice and the winner of the Advanced category also becoming ‘Turner of the Year’.

April 2015
The club commenced its first monthly newsletter which is emailed to each member.

March 2015
Our club is now affiliated with the AWGB giving members all the benefits of membership of this organisation for more detailed information refer to the AWGB website at http://www.awgb.co.uk/

February 2014
After registering our web site with search engines, a counter was added a week ago and in that week we have had 1348 hits.

Doing a google search for ‘woodturning weston’ now brings ‘www.weston-woodturning-circle.co.uk’ up first and ‘www.westonwoodturningcircle.co.uk’, our previous web site up third although only because it now points to the current site.

February 2013
Scouts from Banwell put their skills to the test when they paid a visit to the club the local press attended.

May 2011
An open night was held at Weston AFC premises members brought a significant amount of items for display along with items for sale it was a well attended event with the local press attending.

November 2011
In an effort to raise awareness of our club and so hopefully attract younger members it was decided to approach all local schools, youth clubs, scouts and guides organisations letters were sent and followed up by phone calls with a very poor response.

November The Arkwright spinning wheel is completed and was test driven by a local lady who spun wool on the finished item.

Member Bob Baldock brought along a half scale model of an Arkwright spinning wheel and suggested that as a club project we should make a full size item.

This suggestion was met with great enthusiasm and the club formed into working groups and over the following months completed a full sized version which was later raffled and all proceeds which exceeded £1200.00 were donated to Weston Hospice.

Club member Alex Baxter one of the newer members was congratulated on his hour glass which was exhibited at the Axminster Power Tool Show for which he gained a bronze award.

The club membership stands at 30 members

March 2003
Members are encouraged to bring along items of their work for discussion.

November 2002
Chairman Bryan Jackson reported that since the first meeting in November 2002 the club had taken off beyond all expectations.

Dave Chinn Treasurer reported a paid up membership of 23 members.